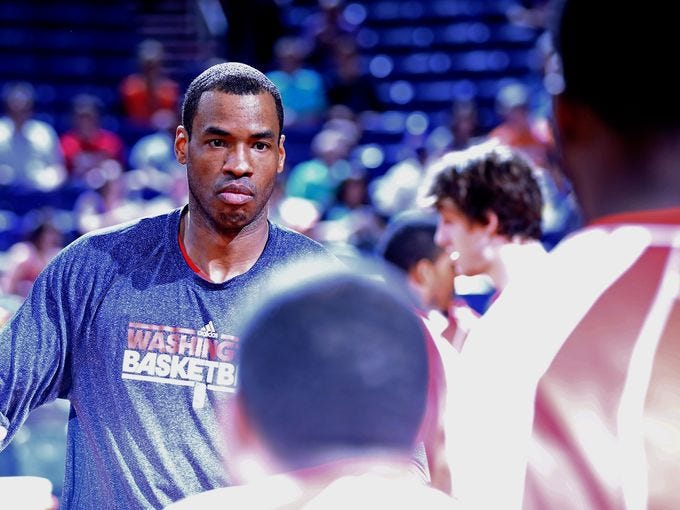 As a huge queer and an equally huge fan of sport, I was totally brought in by NBA centre Jason Collins’ Ellen Degeneres-style “Yep, I’m Gay” announcement yesterday. But instead of feeling excited, pleased, even ambivalent, I felt mostly dread and anger from the minute a friend sent me the article, moments after it went up on sportsillustrated.com.

The story of North American sexual exceptionalism that is being used to frame the Collins story is what troubles me the most. Jasbir Puar has called this “homonationalism,” the idea that the civic embrace of “alternative” sexualities is testament to a broader progressive modernity, one that is coded as white and set against images of Muslims and Arabs as “non-modern” and “homophobic.” These are the new perverts, pitted against the new Gay Normal, epitomized here by Collins. He is everyman, jock, upwardly mobile African-American, and hardworking, journeyman center who puts his body on the line 82 games a season, taking charges like a not-faggot.

Bill Clinton’s statement (Collins and Chelsea Clinton were bros in college) epitomizes the GAYSARENORMAL, GIVE THEM RIGHTS ideological formation to which the Collins story was quickly articulated, including its biopolotical, citizen and family-making function. Said Clinton, “It is also the straightforward statement of a good man who wants no more than what so many of us seek: to be able to be who we are; to do our work; to build families and to contribute to our communities. For so many members of the LGBT community, these simple goals remain elusive.”

It’s not just that I would rather Collins had worn Venus Xtravaganza’s number on his jersey instead of Matthew Sheppard’s, or that I wish this story wasn’t overshadowing the one about Brittney Griner, dreamboat lesbian basketball hero; rather it’s that I’m skeptical about what it is that this representational politics about sport and non-normative genders and sexualities actually offers as a critique of the institutions in which it operates.

Sports is purportedly the great equalizer; a site that is often thought to transcend, even resolve class and racial antagonisms.  It is precisely this everyman—not everywoman—quality that shores up the ways in which professional sports is enmeshed with some truly awful politics; the kinds of things that queerness should work to oppose, such as the celebration of militarism, the racialized exploitation of workers (head injuries, union busting), nationalism, and normative gender roles.

I love sports so so much, but I want my pleasure in sport to keep open all its ugly parts. Because the politics sports offers is found, I think, in the complexity of these bad feelings, queer unbelongings, and in the ways I manage to inhabit both my pleasure and discomfort. The political hope sport offers is far greater than just a representational big tent where Collins and Griner get their butts patted just like everyone else; it is found, I think, in feeling our way through why sport is an uncomfortable home for so many queers whose bodies, sexualities, racialized histories, or colonial critiques don’t find such an easy role on the team.

So instead of celebrating this Big Gay Jason Collins jam, I’m going to ramp up the feminist killjoy function of this tiny essay and remember a few other recent BIG GAY MOMENTS in professional sports, ones that I like because they antagonize.

Remember last year when 49s cornerback Chris Culliver used a pre-Superbowl media scrum as a podium to say: “Ain’t got no gay people on the team. They gotta get up outta here if they do. Can’t be with that sweet stuff.”

Remember last year when MLB shortstop Yunel Escobar wrote the Spanish equivalent of “you’re a faggot” on his eye black?

Remember last year when Kobe Bryant called a ref a “fucking faggot?” I’ll always remember the face he made when he said it: